Mother Teresa expressed grave doubts about God's existence and pain over her lack of faith:
"Where is my faith? Even deep down ... there is nothing but emptiness and darkness ... If there be Godóplease forgive me. When I try to raise my thoughts to Heaven, there is such convicting emptiness that those very thoughts return like sharp knives and hurt my very soul ... How painful is this unknown painóI have no Faith. Repulsed, empty, no faith, no love, no zeal, ... What do I labor for? If there be no God, there can be no soul. If there be no soul then, Jesus, You also are not true"
-Mother Teresa

"All I'm saying is simply this, that all life is interrelated, that somehow we're caught in an inescapable network of mutuality tied in a single garment of destiny. Whatever affects one directly affects all indirectly. For some strange reason, I can never be what I ought to be until you are what you ought to be. You can never be what you ought to be until I am what I ought to be. This is the interrelated structure of reality."
óDr. Martin Luther King Jr.
Do we re-member?
When we live in a society with a high divorce rate, single parent families, orphanages.
And the children in these circumstances of this society don't have free education until they get a law degree(you need to know the "law" if the "law" is fair) regardless of grades (can't teachers get paid to fail somebody?).

And employers are not required to have educational "insurance" (really it should be called assurance) along with medical "insurance."
That tells you something about this society. The New Jim Crow
-JUST BEFORE THANKSGIVING, AMERICAN HISTORY AND GENDER STUDIES SHOULD BE TAUGHT BY A MEMBER OF EACH CULTURE; AFRO-AMERICANS, AMERICAN INDIANS, EURO-AMERICANS, ASIAN AMERICANS, HISPANIC AMERICANS, BI-RACIAL AMERICANS,(WITH FIELD TRIPS TO RELATED CULTURE'S CITIES, FOR EXAMPLE CHINA TOWN, INDIAN RESERVATION, HARLEM, WASHINGTON D.C.) ETC..-
I HAVE A DREAM(vision) TO REPLACE PRISONS WITH COMMUNITY COLLEGES AND MILITARY/MEDICAL COLLEGES (PROTECTION AND HEALING).
(if military schools required music, and massage therapy in their core curriculum there would be more protective healing in the world.)(Maybe chiropractic therapy for all the Lethal Weapons that my dislocate their shoulders in battle.)

Des'Ree You Gotta Be

Maybe Barack and Hilary need a semi-monogamous (marriage?) relationship. I'm sure Bill would understand, but I don't know about Michelle (maybe she marries Bill). That's still heterosexual, not that it matters (to everyone).
Hey, I'd rather have our political leaders be semi-monogamous than experience another 911!!
You can call me crazy, I'll just say I'm crazy enough for our endless joy and happiness. (I prefer monogamy, but I am open minded enough to realize a semi-monogamous relationship might actually be better) polyamory marriages or semi-monogamy marriages (4 heads are better than 2) might actually be better (more parents per child). I might have to change my mind about preferring monogamy because it might be an excuse to lie about me and lie to me or lie to me then lie about me. I'd prefer to be monogamous in a 4 person marriage than a 2 person marriage, because I think that is what would make an inter-racial marriage legal.

Vote them back in office because it is probably like being in a mental institution being in charge of this crazy world. Maybe their crazy enough for our endless joy and happiness too.
There's still a lot of work to do. (Mr. and Mrs. Fockers Meet the Poly Fellows)

Passing or Failing grades bought and paid for in resource based education and housing? Probably not.
It's not that bad.
Good enough for now?


"Only through learning can we open the spiritual windows of humanity, releasing people from the confines of ethnic or other group-based worldviews. Ethnic identity is deeply rooted in the human unconscious, and it is crucial that it be tempered through unremitting educational efforts that encourage a more open and universal sense of humanity."

If you can steal God then it is not God.
How can you 'steal religion'?
How would you have freedom of religion?
Donations support religions not taxes or profit.

Bill Withers - Lean On Me by chilavert

ìDagara peopleís main job is to look the dead in the face, to treat their bodies not as remains but as temples of grace and beauty continuing from this world to the other."

African or Asian Pope?
Water As-Sign
Everything is disconnected. It is just disconnected in the right way when we create the illusion of connection.

"As stories about Saint Nicholas multiplied, incidents were told to give witness to his holiness. In this one, Nicholas must have been in the desert of the soul, as he asked God for a revelation. Then Nicholas could be be confident of God's presence and have renewed confidence in God's call to serve as a bishop, loving and caring for the people.

"So Nicholas made his way up a mountain where he prayed. As he prayed, a riveróa hidden treasure of waterógushed forth, flowing down the mountainside.

"Nicholas rejoiced at the sight. He came down the mountain renewed and refreshed to live out his call to serve God and God's people."
-St. Nicholas Center Collection


The Bellshrine of St. Patrick 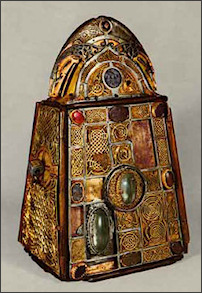 "The Irish for a bell is cloc, clocc, or clog, akin to the English clock. The diminutive form cluccene is used to denote a small bell, called also lam-chlog, 'hand-bell. St. Patrick and his disciples constantly used consecrated bells in their ministrations. How numerous they were in Patrick's time we may understand from the fact, that whenever he left one of his disciples in charge of a church, he gave him a bell: and it is recorded that on the churches of one province alone - Connaght - he bestowed fifty. In the Tripartite Life we are told that a certain bell called Bethechan, belonging to St. Patrick, was a little bell of Iron"" (cluccene becc lairnd).

"The bell of St. Patrick, which is more than fourteen hundred years and is now in the National Museum, in Dublin: it is the oldest of all; and it may be taken as a type of the hammered-iron bells. This is the bell known as Clog-an-uudhachta, or the 'Bell of the Will' (so called because it was willed by the saint to one of his disciples), which is much celebrated in the Lives of St. Patrick." (more)
01 Jan '12 - 20:41 | musix | General | | Permalink